↓ Hoppa till huvudinnehållet
Hem › About

Stockholm Stompers is a band that doesn’t want the listener to be attracted by sentimental reasons only. The band produces romping hot music that is vivid and fresh, yet deeply rooted in the hot jazz of the 20’s. The energy and stompy swing are the most recognizable features.

The five-piece setting defines Stockholm Stompers as a quite small band but the multi-instrumentalism of the musicians makes a lot of variation possible and the arrangements make the band sound bigger than it is. All instruments are used in a number of roles and every tune gets special treatment. Nothing is ever cast in the same form.

A very important voice in the band is the intense vocals of Martin Ljungberg. He sings the low-down blueses and makes the old songs come alive. Besides main-vocalist Martin almost the whole band is featured as vocalists providing both background vocals and special numbers. 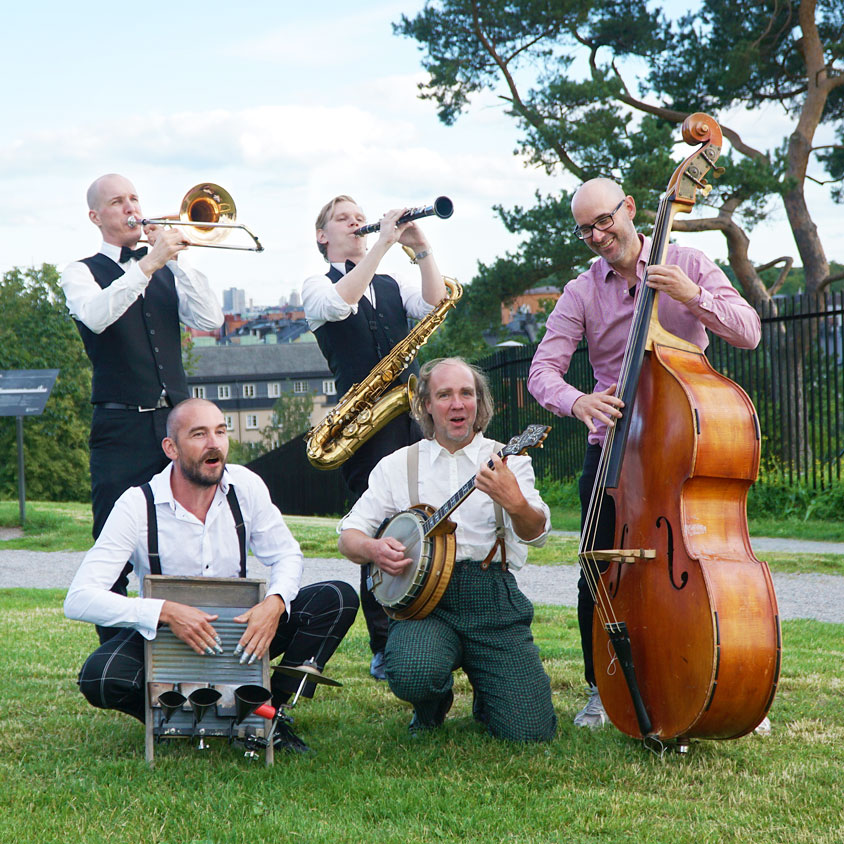 A freelance trombonist mainly focused in the styles of jazz, salsa/timba and mbalax. Nikolas is a resident member of The X-Dump electronica collective with his solo act Matophonia. The Senegalese/Gambian percussion tradition called Sabar is a great source of inspiration for him.

Björn is Stockholm Stompers latest member originally from the woods of Värmland. He graduated from the Royal Collage of Music (KMH) in Stockholm in the spring of 2020 and in his exam project he immersed him self in the 1920-30-ies music played at the Broadway, New York by making his own compositions in the same style. Björn is an up and coming saxophonist in the Stockholm jazz scene and can also be heard in bands like Stockholm Hot Seven, Mimmi And The Original Blue & The Glenn Miller Orchestra.

Jacob Ullberger has been a professional musician since the early 90’s. He has recorded some twenty records and been touring Europe, USA and Japan.

He’s the main contributor of arrangements to the Stockholm Stompers book and his stringed instruments provide the chordal background to the band as well as take on flight in personal and inventive solos. Occasionally his clarinet fills a third part in the horn section.

Alf Sjöblom is a versatile double bass player who plays all kinds of jazz. In Stockholm Stompers he gets perfect use for his slapping techniques and his bowing. And his tuba-playing gives color to the stomps and low-down blueses.

Martin Ljungberg is since 25 years raised as a rock and roll drummer in the family band, which is still active. His father was a washboard player and a singer and that’s where Martin found his inspiration. He has been a professional musician since 2005.

Ulf Dreber is a true classic jazz musician who has been able to expand on his interest in playing classic jazz when family and support tasks gradually have become less heavy. He nowadays plays the soprano saxophone also in Stockholm Blue Swing, Storyville Creepers and Jelly Babies Jazz Band.

Stockholm Stompers was founded by the trumpeter Bent Persson and Ulf Dreber – then a clarinet player – in the mid 60’s, while students at Stockholm School of Economics. They gathered some of the musicians from Mercblecket – the school band. The aim was then, as it is now, to play classic jazz. The degree of activity was quite high during the following couple of years, but fell off when Ulf Dreber moved from Stockholm for some years and Bent was more and more engaged in other bands. Ulf, however, who was trusted with the band name, formed a new group in the mid 80’s. A very prominent member of the new band was the legendary trombone player George Vernon. He very generously took his time to play and coach the band. Some of the band members played in other bands and were otherwise too engaged in their jobs to be able to spend much time playing music. The year 1996 the band was once more dissolved.

During the fall of 2007 Ulf gathered a group of young, talented musicians who were interested to form a group with a unique sound and with the instruments soprano saxophone, trombone, guitar/banjo, double-bass and washboard. The finest name they could think of was Stockholm Stompers. This was also a little homage to Bent, a musician who has meant a lot to us. At this time the group included the Norwegian trombone player Kristoffer Kompen.

The first appearance of the band was in the jazz contest in Stockholm in February of 2008. The band won that contest and got the opportunity to play in the Sweden finals where it came in second. After the record When the Stevedore Stomps was recorded later the same year Kristoffer Kompen left Sweden to go back to Norway and was replaced by Kaj Sifvert

Since the restart the band has been very active playing clubs, festivals, events and parties. Kaj Sifvert left in 2013. For a while the band had a trumpet – played by Joakim Falk – as brass instrument instead of trombone. With Nikolas Viisanen joining the band in 2014 the band returned to the original sound with a trombone as the brass. In 2020 Ulf has left the band and Björn Bäckström has joined instead.